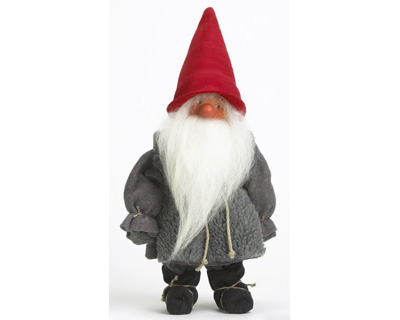 These small creatures live in and around the houses and sheds on Swedish farms.

If you are wise you will show the Tomte “due respect”, and he will protect the household from accidents and disasters.
But he will play tricks on you if you annoy him.
In the past it was the costum to leave a bowl of porridge outside your house under the front door stairs, at Christmastime for the Tomte. If the bowl was empty the next morning all was well for another year.

In Scandinavian folklore there are two sorts of troll- Bergstroll who live in caves in the mountains and Skogstroll who live in the deep dark forests. They hoard treasure in their dens.
Trolls have big ugly noses and long tails, really nasty – stealing food and swop their own babies – “Trollungar” for unchristened children – “bort-bytingar” .
Trolls can’t stand daylight so they are only active at night.
They can live for several hundred years.
Phrases such as “rich as a troll” or “ugly as a troll” are often heard in the Swedish language.